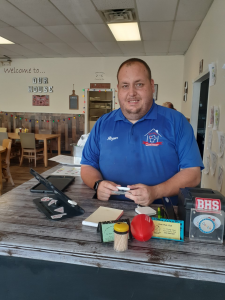 Roger is a client who loves to be involved in the community and knows everyone in his charming small town. When Roger was laid off, it ended up being a blessing in disguise. Little did he know at the time, this twist of fate would lead to him finding a job he loves in an establishment that makes him feel at home.

Roger was referred to Angela, his employment specialist with employU, shortly after he was laid off. Together, they started looking for his next employment opportunity. During their search, Roger and Angela met with Danny and Nicole, owners of Our House Restaurant, who agreed to an on–the–job training with Roger. During this experience, Roger worked different positions throughout the restaurant, and found that he enjoyed serving tables the most.

After his on-the-job training was completed, Roger accepted a permanent part-time position with Our House Restaurant. His managers described him as a truly integral, team player who is always willing to lend a helping hand where ever he is needed. When the restaurant lobby closed due to stay-at-home orders, to-go and curbside pick-up were the only services available. Roger took this time as an opportunity to expand his experience in other areas of the restaurant. He showed true dedication to his job and Our House Restaurant.

Roger explains how much he loves being a part of the Our House Restaurant team saying, “Nicole and Danny are good bosses and it is a place I can call home.”  As it turns out, one door closing lead to the opening of another and a place to call home.