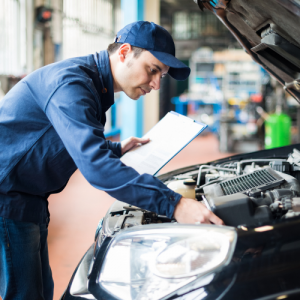 Dean was a Master Auto Mechanic for about 30 years, but after being diagnosed with a brain tumor in 2011, his life changed. Following surgery to remove the tumor, Dean became completely paralyzed on the right side of his body. He was told by doctors that he would never be able to work again. He went to physical therapy and carried over those exercises at home. In the meantime, he applied for SSDI. It took two years for his benefits to be approved. Because of this, Dean ended up losing his house, cars, and other belongings. He was understandably devastated that he no longer had an active, self-sufficient lifestyle. He knew something had to change. He had to re-invent himself.

Dean decided he would do whatever it took to work again. He moved in with his son, worked hard with physical therapy on his own, and has recovered from most of the paralysis on his right side.  A year ago, he moved into his own place and decided to sign up with Vocational Rehabilitation for assistance with finding a job. After being referred to employU, his Employment Specialist, Joyce, got to work right away. Their time and effort looking for and applying to mechanic jobs paid off. After applying at Inst-Quick, Dean was hired as a Lube Technician.

From the start his employer was impressed by his skills and strong work ethic. Dean was on top of world and very pleased that he was able to become gainfully employed. Afterall, it’s something he was told he would never be able to do again. Furthermore, he’s able to do the job without difficulty and maintains an upbeat, positive attitude while working.

About a month after he started the job, Dean was able to buy himself a scooter. While it was bought as a means of transportation to work, having it has also allowed him to become more independent and social. So, what’s next for Dean? He’s already working towards another goal – to become a homeowner again. After another year, he will have the option to buy the house he is currently renting. We truly believe nothing will hold Dean back from accomplishing any goal he sets for himself and are proud to have been a part of his journey of success.  For more information on our Adult Employment Services visit https://employu.org/adult-employment-services/