Diving Right in to Make a Difference – Clayton’s Story

Diving Right in to Make a Difference – Clayton’s Story 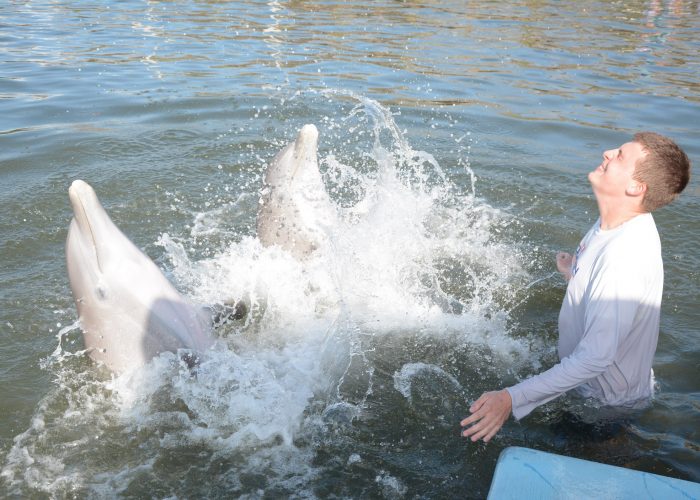 Overcoming your fears is something we all find difficult from time to time.  It’s not easy to do.  But what about overcoming a fear… and turning into a passion that serves others?  That’s exactly what employU client Clayton did.

Clayton first became interested in marine life after a 2006 visit to Discovery Cove.  He always seemed to have a connection with animals but was especially in tune with the dolphins. “This kid is the animal whisper,” his sister, Shelby explains.  Fascinated by the dolphins, Clayton was eager to learn more.  “[Dolphins] are beautiful, graceful, and smart like us,” Clayton explains. This interest led him to the Clearwater Marine Aquarium to see the infamous dolphin named Winter, as well as several other trips to see and learn more about dolphins.

As Clayton’s interest grew, he began to become more and more interested in the ecosystem of the ocean.  One animal he wasn’t so keen on? Sharks. Like many of us, Clayton had watched shark week and was aware of how terrifying sharks can appear. Because of this, he was hesitant to get into the salty water of the ocean, even though he was deeply interested in the habitat.

However, Clayton was able to do something many of us struggle with throughout our lives. He was able to overcome fear.  Not only did he overcome his fear, but he also deepened his passion for sea life in the process. After visiting Shelby at college, Clayton felt the desire for a taste of his own independence.  So, in 2017 Clayton set out to participate in a dive trip with a group of his peers and a dive instructor. During this trip, Clayton learned how important sharks are for the ecosystem of the ocean and coral reefs.  He began to see that maybe sharks weren’t so bad after all.  Clayton also overcame his long-time fear of going into the ocean… and dove in.

Needless to say, Clayton’s interest in marine environmentalism was sparked and he decided it was something he wanted to pursue. He began attending the College of the Florida Keys and is currently completing his certifications in Marine Mammal Behavior and Training and Professional Research Diving. Here, he met his college professor, Dr. Jason Spadaro. Dr. Spadaro has become a mentor of Clayton’s and encourages him to pursue his dream of working with marine life.  He has even taken him on dives to replant coral.

After coming to employU and meeting his job coach Sheila, Clayton expressed his interest in a career path involving marine life.  Sheila saw Clayton’s intense passion and knew she had to do everything she could to do foster this interest and turn it into a fulfilling future career for Clayton.

Sheila reached out to Mote Marine Laboratory in Summerland Key. Due to the priority of the coral spawning season, the process of placing Clayton at Mote was delayed. But Shelia kept the family updated weekly on progress so they would not feel that hope for Clayton’s paid employment experience was drifting away. “While experiencing the delays, I think those two months allowed the family and I to start developing our own relationship built on trust and transparency and understanding of my and employU’s dedication and support of Clayton’s advancement,” Sheila explains.

With the help of her network and Dr. Spadaro, Sheila was able place Clayton in an on-the-job training (OJT) with Mote.  Clayton is now on his third on-the-job training at Mote and loves working there.  Though he is happy to do whatever duties they ask of him, he works primarily on Mote’s coral reef restoration project.  He holds a fundamental role in the health and cultivation of coral plugs, maintaining the cultivation tanks, conducting health assessments on the coral plugs, and making recommendations for remedies. When asked what his favorite task is, Clayton said, “I am not a favoritist.” He does express a desire to do a good job and be helpful in some way.  His sister Shelby explains that Clayton has always enjoyed helping and doing things for others. This is evident in Clayton’s strong work ethic and kindness as reported by his colleagues.

Through Clayton’s OJT’s, he works hard, hoping for future permanent employment either in Summerland Key or at the main location in Sarasota continuing to work in coral restoration or working with marine mammals. Clayton has made such an impact that he was nominated by Mote to be an Unsung Hero. This is a respected nomination and an annual event sponsored by the Community Foundation of the Florida Keys, where non-profits in Monroe County nominate their best volunteer to be recognized and lifted for their work and impact on the community and environment.

Currently, Clayton’s goals include obtaining permanent employment, continuing to establish his financial and personal independence, continuing to pay his rent for his apartment, and saving money to cover the costs of car ownership. employU is certain Clayton will be able to achieve these goals and so much more.