People First Language: What Is It, How to Use It, And Why It’s Important

People First Language: What Is It, How to Use It, And Why It’s Important

People First Language: What Is It, How To Use It, And Why It’s Important 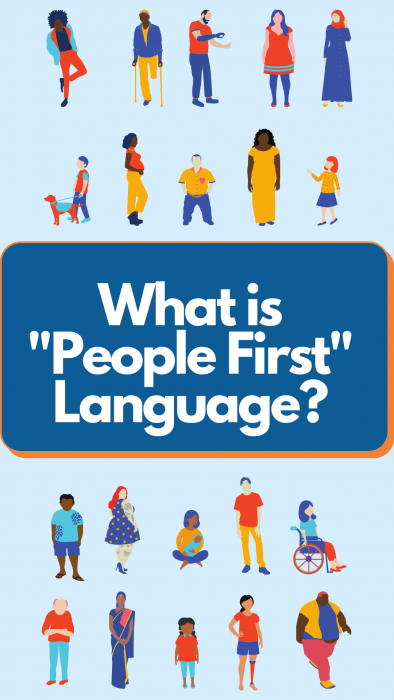 The word “disability” covers a wide variety of medical diagnoses.  Historically, people with disabilities have had to fight for the right to accommodations and to be heard in general.  “People with disabilities have historically been marginalized, hidden, ignored, pitied, stereotyped, and cast aside.  Instead of looking at the person in a holistic way, the person’s disability became their primary descriptor.  Their disability also became their identity, by which they have been defined and categorized,” explains employU Vocational Evaluation Program Director, Jenn Anken.  Today, laws in place like the ADA (Americans with Disabilities Act of 1990) help protect the rights of people with disabilities to ensure they are treated fairly and with respect.

So why is “people first” language important? “As we shift our language to place the person first, we begin to remove the negative connotations and misconceptions about disability and shift to a more holistic and ability-focused viewpoint,” Anken explains.

While “people first” language is overall preferred, some within the community may prefer the use of “identity first” language.  Anken recommends asking each individual what language they prefer. “It is important to keep in mind it is their choice to self-identify in the manner of their choosing.  The manner in which persons choose to self-identify is an individual decision and one for which they should not be corrected or admonished.  When working with persons with disabilities, best practice includes asking the person how they self-identify, and what terminology they are personally comfortable with.” By making the small step to be mindful of the importance of our words and intentional use of preferred language, we can do our part in creating a more inclusive society.