SEARCHing for a Path to Success: Latavia’s Story

SEARCHing for a Path to Success: Latavia’s Story 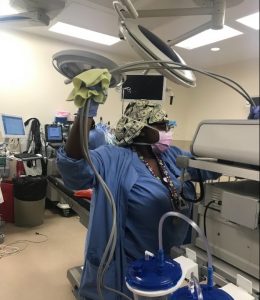 Latavia is a hard-working woman who had a desire to contribute to her household income and create a better living situation for her mother, her brother, and herself. She came to employU during her junior year of high school and worked four different on-the-job trainings (OJTs). Latavia told her job coach that she would like to work at Publix. So, accordingly, her job coach set her up with an OJT at a grocery store to gain experience. She went on to complete on-the-job trainings with a plant nursery, retail store, and a dog groomer.

But she didn’t stop there. Eager to continue gaining job skills through workplace learning experiences, Latavia decided to participate in Project SEARCH. Project SEARCH is a collaboration between the school district, vocational rehabilitation, employU, and the Cleveland Clinic where students gain experience working within the Cleveland Clinic hospital. Latavia completed three rotations, working in Labor and Delivery, the Operating Room, and the Materials Department.

As she was nearing the end of her third rotation, Latavia and her job coach began to explore the possibilities of her being hired within the hospital. There was an interest in hiring Latavia from the OR Director immediately. After observing Latavia’s hard work with Project SEARCH over the past three months, the OR Director was quick to make it known that she wanted Latavia to be part of her team. However, the budget for the department, which had already been approved for the year, did not have an allowance for the additional staff.

The Director decided to redo her entire department budget to include hiring Latavia. After creating a modified schedule that would allow for Latavia to use public transportation to get to and from work, the OR director hired Latavia in May of 2019. Latavia joined a crew of 4-6 people that prepare and clean up the OR between surgeries. She works at a fast pace, is diligent in her duties, and is respected as part of the team.

Since she was hired, she has continued to work 40 hours per week. This has allowed her to become a major provider for her household, helping her mother with finances, and allowing for a better life for her entire family. Transition Coordinator, Jeff Hancock comments, “Latavia is the true reason why we do the things we do at employU. We are not just getting people jobs; we are changing lives.” For more information on our Transition Youth Program and on-the-job trainings visit https://employu.org/transition-youth-program/