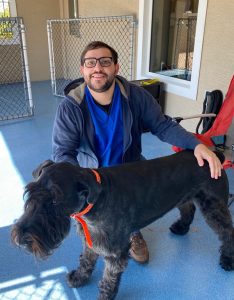 Sometimes when working to achieve your own dreams, you end up helping others on their journeys as well. Christian is an employU client who experienced this when his path towards success became a path that also included the accomplishments of others, due in part to Christian’s assistance.

After Hurricane Maria struck Puerto Rico, Christian relocated to Florida to start over. Once in Florida, he was connected with his Employment Specialist, Susan, and expressed an interest in working with animals. He didn’t have any formal experience but had completed courses from the Animal Behavior College and volunteered at local animal shelters to prepare for his dream career. Susan was able to find an On-the-Job Training (OJT) opportunity for Christian at Guardian Veterinary Medical Center as an animal caretaker. Though he dealt with some anxiety at the beginning of his OJT, his passion for animals motivated him to keep going and work harder to learn as much as possible. He learned everything from the ground up when it came to caring for the animals.

In addition to learning the ins and outs of the clinic, Christian was an integral part in redoing their hotel pet logs. He suggested condensing the list of over 45 questions down to a single-sheet of need-to-know information on the pet’s well-being and care. This made things much more efficient, not only for Christian, but for the rest of the staff as well. Christian explained he had been spending over 45 minutes filling out the original pet log. The condensed version now takes about 10 minutes and allows time for staff to move on to additional tasks much more quickly. After Christian completed his OJT with Guardian Veterinary, he was hired on permanently.

It is now two years later, and Christian is still loving his job at Guardian Veterinary. He’s a Hotel and Daycare Technician who assists with grooming, daycare, and boarding. Recently, another client started their On-the-Job Training at Guardian. Christian was included on the meetings to prepare for her start. Knowing that both he and the new OJT participant were on the Autism Spectrum, Christian offered his assistance in training and getting her acclimated to working at Guardian Veterinary. Christian’s goal in training the new OJT participant was to make sure she felt comfortable. He understood the value and importance of feeling at ease while learning and wanted to make sure that others on the spectrum feel welcomed and embraced. He even created personalized name tags for the two of them based on a common interest. The new OJT participant was scheduled to work with Christian and remarked that Christian was supportive and welcoming. She explained that he was the person who made her feel most comfortable and who really helped her succeed at her On-the-Job Training.

In achieving his goal of finding a career working with animals, Christian has, in turn, helped others succeed on their career path as well. He is also credited with being an employee who works to create an environment that embraces diversity and prioritizes inclusivity, generating an atmosphere that fosters the successes of many. We can’t wait to see what the future holds for Christian and want to congratulate him on all his accomplishments thus far!