When Determination is a Superpower: Chase’s Story

When Determination is a Superpower: Chase’s Story 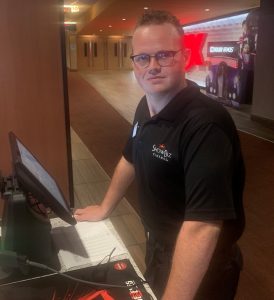 Sometimes determination can be a superpower all on its own. That is certainly the case with employU client, Chase. Chase has a passion for movies and it’s no surprise. A love for the silver screen runs in the family. Chase’s grandfather was even a projectionist at a movie theater. Although Chase is a true movie buff with knowledge of all types of films, his favorite movie protagonist is Batman. Batman doesn’t have any of the typical superpowers.  He can’t fly or shoot lasers out of his eyes. But what Batman has is something within himself. His determination to continue fighting and moving forward, that’s what makes him a superhero.

Determination is a characteristic Chase and Batman share. Making the decision to start a health journey and lose over 200lbs, Chase committed to a lifestyle change that included a change in diet and the addition of an exercise regimen. He joined the YMCA and was committed to his new fitness routine. Seeing his commitment and determination, a YMCA trainer was impressed and offered Chase his first job, without even interviewing!

Chase accepted the position and enjoyed his work at the YMCA. But when COVID hit and gyms had to close, Chase lost his job. Eager to get back to work, Chase decided to re-enter the workforce instead of filing for unemployment. He was determined to get back to work, even during such an unprecedented time.

Chase’s mom was not surprised by her son’s determination. Chase has many qualities employers would find valuable and his determination is just one of them. These unique qualities have become Chase’s superpowers from within.  “Sometimes the things that make an individual with autism different, are the same things that become their strengths, like; attention to detail, punctuality, retain-ability, and maintaining long-term employment,” she explains.

After being referred to employU, Chase met his Employment Specialists Craig and Sheila. Craig and Sheila quickly noticed the determination within Chase. As they accompanied him to visit potential employers, Craig and Sheila realized it wasn’t long before they were struggling to keep up with him. Eager and determined to move forward, Chase’s enthusiasm was visible. Not only that, he was prepared to put his best foot forward from the start. When visiting a job fair, one potential employer pointed out that Chase was the best-dressed candidate they had interviewed that day.

That potential employer became Chase’s current employer! Show Biz Cinemas is the perfect fit for a movie enthusiast like Chase. He is now trained at the Ticket Taker counter and coordinates the cleaning efforts of a twelve theater showtime roster. He truly enjoys his job, is committed to doing his best, and is in it for the long haul. Chase is the perfect example of how we can all be our own superhero in this movie called life. All it takes is a little determination from within. For more information on our Adult Employment Services, visit https://employu.org/adult-employment-services/