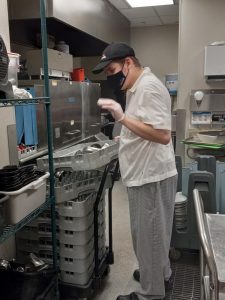 Having a passion and turning that into a lifelong career is something many dream of doing. employU client, Michael, is taking steps to make this dream a reality. Michael was referred to employU in 2019, where he met his Job Coach, Jernice. At the time, Michael was working in a restaurant at Universal Studios as a dishwasher. He loves the food industry and has dreams of working in a restaurant kitchen.

After his family relocated to Dundee, Michael, with the help of Jernice, applied and interviewed for a dishwasher position at LEGOLAND Resort. Right away, Michael expressed interest to both Jernice and his supervisors at LEGOLAND that he was interested in learning how to make pizzas and assisting the cook. Knowing his passion for food and working in the kitchen, Jernice worked with Michael’s supervisors to give him more opportunities to practice his culinary skills by having him work Food Prep shifts.

Meanwhile, Michael has also started taking culinary classes. Through it all, Jernice has seen a substantial amount of overall growth in Michael. “He smiles more and talks more with me and his co-workers,” she explains.

A hard worker, Michael also receives loads of praise from his supervisors at LEGOLAND. “Michael has been an awesome Model Citizen here at LEGOLAND,” his supervisor, Rebecca, tells us. “…He can completely run the dish room with little help. Michael is always willing to help other kitchens’ [with] dishes and does it with a great attitude, even without management’s request. He sees it needs help and he does it.”

His supervisors aren’t the only ones who have noticed Michael’s motivation. His mom has seen a change in him since working at LEGOLAND and starting the culinary program at Ridge Technical College. “He is more involved, he wants to help cook at home, and feels as if he has more of a purpose than before.” We are so proud of Michael for taking steps to achieve his dreams and are excited to see him continue to grow as he achieves his goals.  For more information on Supported Employment with employU visit https://employu.org/supported-employment/