Building a Career with His Hands – Hasani’s Story

Building a Career with His Hands – Hasani’s Story 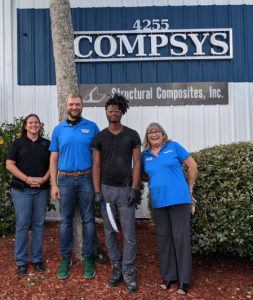 Hasani was referred to employU his junior year of high school.  When he expressed an interest in working with his hands and building, his job coach, Ryan, knew manufacturing may be a great career path for Hasani to explore.  That summer, Hasani began his on-the-job training with Compsys. Hasani immediately took to the work and enjoyed every minute of it.  Working with his hands and fiberglass, he appreciated the fast-paced environment and wanted to do and learn as much as he could.

“He did a fantastic job,” says Crystal, Vice President of Compsys. Once his work-based learning experience with Compsys was completed, Hasani told Crystal he would like to work at Compsys forever.  After graduating from high school, Hasani set out to do just that.  He filled out an application and asked Crystal if Compsys had any job openings.  Remembering him from his on-the-job training, Crystal told Hasani to come in for an interview.

Because he had the experience he had gained from his on-the-job training, Hasani beat out a few other candidates applying for the same position.  He is coming up on his 90-day review with the company and will soon be eligible for full benefits including medical, dental, and a 401K.  Crystal explains, “The hard thing with manufacturing is that there is a lack of interest in the younger generation for trades.  So when you have someone like Hasani, who all he wants to do is work with his hands and build things, those are the types of students you really need to grab onto and foster and train. We couldn’t thank employU enough for the opportunity and for bringing Hasani to us.”

Crystal sees a lot of potential for Hasani with Compsys.  He has been partnered with a mentor and is currently being cross-trained in different departments.  With his drive and enthusiasm, Crystal foresees a lot of career growth for Hasani in his current path. employU is happy to hear that Hasani found a career he loves and looks forward to hearing more about his journey in the future.